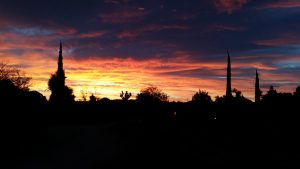 Once a month the Sun and Moon dance together and we refer to this as a new Moon. The newness refers to the beginning of any cycle and in this case it is the lunar initiation for the next journey around the zodiac. More often than not these new Moons occur in the next sign each month, but every once in a while the 31 day month can include two lunar new Moons, one at the beginning of the month and the other at the end. We are not in that kind of cycle currently. As a matter of fact the new Moon on Monday the 31st will happen near the potent cross quarter point of 15° Aquarius. These cross quarters are the half way points between the seasonal beginnings of Spring – Aries 0°, Summer – 0° Cancer, Fall – 0° Libra and Winter – 0° Capricorn. These are the beginnings of all the Cardinal signs with the cross quarter points being in the center (around 15°) of all the fixed signs of the zodiac. Back before the clocked life cycle took over these cross quarter times were celebrated as the half way point in a season.

Imbolc symbolizes the halfway point between the winter solstice (Yule) and the spring equinox (Ostara). The word “imbolc” means “in the belly of the Mother,” because the seeds of spring are beginning to stir in the belly of Mother Earth. The term “oimelc” means ewe’s milk.

Beltane is a Pagan holiday, and one of the eight Sabbats. It falls about halfway between the spring equinox (Ostara) and the coming summer solstice, Litha. The holiday celebrates spring at its peak, and the coming summer. Beltane also sometimes goes by the name May Day.

Wiccans use the names “Lughnasadh” or “Lammas” for the first of their autumn harvest festivals. It is one of the eight yearly “Sabbats” of their Wheel of the Year, following Midsummer and preceding Mabon.

Samhain (pronounced ‘sow’inn’) is a very important date in the Pagan calendar for it marks the Feast of the Dead. Many Pagans also celebrate it as the old Celtic New Year (although some mark this at Imbolc). It is also celebrated by non-Pagans who call this festival Halloween.

As with every new Moon we are tasked, should we care to participate, in setting intentions to focus the upcoming lunar cycle on. Since this one begins in Aquarius the potential for innovation and the inclusion, at some level, of other aspects of the human family are on the table. We are nearing the end of the current Mercury retrograde cycle so, are there any inventions that you have come up with during this time of deeper pondering? Here is the Sabian symbol interpretation from Dane Rudhyar’s “An Astrological Mandala” to meditate upon for this upcoming new Moon to possibly assist in determining what to include in your intentions:

KEYNOTE: The ability to discover basic natural facts that allow us to plan in advance for action.

Here we are no longer dealing with ascent or descent, but with natural laws which involve causal relationships and the passage of one natural condition into another. The barometer registers air pressure, and a change of pressure today gives some indication of what the weather will be tomorrow. In a sense this is the

modern scientific equivalent of archaic prognostication through omens. Likewise, animals grow a more or less thick fur in early autumn according to whether the winter will be more or less severe. Planning for the near future is a possibility because the potential (or seed) of the future is already operating at the core of the present.

This third symbol of the sixty-third sequence tells us that it is most important to seek, by whatever means and at whatever level of consciousness knowledge of causal progression. In the broadest sense this implies an awareness of cyclic processes, and this includes astrology. The Keyword is ANTICIPATION

As we venture into February the next planetary aspect to arouse our attention will be Mars forming a sextile with Jupiter on Thursday the 3rd. Mars is still traveling out-of-bounds (oob) so even though it is moving through Capricorn don’t expect usual Martian factors to proceed as expected. I would not be surprised to see a lingering Sagittarian flavor in the way that Mars sparks things into action. The Capricorn ruler, Saturn, sits at the Imbolc degree in Aquarius. Might there be vestiges of mid-winter percolation under the surface to potentially have some plants prematurely send shoots up through the soil sent on an adventure of new life? Capricorn’s aim to establish some form of control being stirred by this oob Martian impulse to excel beyond borders of limitation could prove uncomfortable to the establishment.

I might include some Saturn lore into this mix. Saturn is the traditional ruler of Capricorn and Aquarius. In Aquarius where it currently is doing its 2.5 year stroll we need to recognize that while it represents a container within which things can transpire, this air sign is the water bearer and will be pouring substance down into this container until it either flows over the rim or Saturn decides to become larger to encompass this more that is available. The Mars aspect with Jupiter, ruler of both Sagittarius, where Mars recently arrived from, and Pisces where Jupiter currently is traveling are involved in this conversation egging Saturn to expand so-called limitations.

Let’s throw another twist into this cauldron of substance. Mercury will be stationing to go direct on this same Thursday still within in the energetic range of Pluto that it has danced across in retrograde over the past week and will consume the next week in close proximity to this lord of the underworld. Our thoughts are being invited to contemplate what is meant by terminal parameters often utilized as control functions for humanity. You won’t hear this offered by Pluto whose main function is always to awaken us to the potential of vibrantly being alive, but are we so easily led astray in our haste to get ahead in this earth walk journey we are on? And to what end, or is there really and end factor in play? Mercurial mullings currently stir this deep cauldron of our versions of reality.

Turn the page and we find ourselves being entertained on Friday the 4th as the Sun comes into direct contact with Saturn. More Imbolc? Does the Sun’s draw attempt to pull at the buried seeds awaiting spring? Can the Saturn cauldron contain this solar influx of Aquarian energy? Two factors could be pondered here. The substance within Saturn’s cauldron is going to be heated beyond levels where normal containment can withstand. At the same time there is a transmutation of the energy substance available that seeks to evolve beyond any field of containment. The Sun as king or ruler directly stands between Saturn and the Earth. Might there be an infusion of regal energy directing Saturn to aim its control function to be more inclusive? While at one level I was tempted to say more humanitarian but a strong voice compels me to not be so callous as to leave out the rest of the natural world as vitally significant to our human endeavors even if mostly unconscious?